One of the P’s who came to Cumaribo was Manuelito. I think it must have been some 20 or 25 years since I had seen him. Manuelito lives in the village of Mariteta which was a long ways away from Maraca where we used to live. As a young missionary, I was invited way back then to a Bible conference in Marieta. There were about 500 P’s who attended that conference. I was asked to speak. I remember teaching chronologically through the scriptures emphasizing the themes in the Bible; that sin entered the world, and death through sin but that God promised a Savior to deliver mankind. Manuelito was the main leader of Marieta and of the church there. A few years later, I went back to Marieta to continue teaching and building relationships. I stayed in Manuelito’s home. He adopted me into his kinship terminology as a ‘son’. (The P’s don’t use your name when they talk to you. They use kinship terms.) I studied culture and did more teaching. 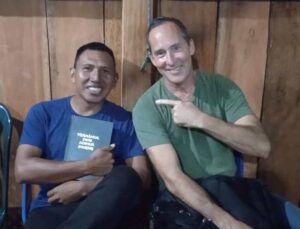 Another piece of today’s story is Rudy. Rudy is a young P who the Rios church in Caracas has adopted over the years and is putting through the mission’s missionary training program. I had invited Rudy to come to Cumaribo which he did. He turned out to be such a blessing as he researched and facilitated the whole group to get there and took responsibility as their guide during the conference until they returned home. He was always serving and the P’s in return treated him honorably. 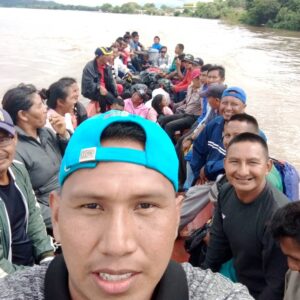 In a short time he has become dear to all the Ps and his love for his people has grown. He is currently on a missions trip to several P villages in the Amazon state of Venezuela. He will continue his studies this fall.
On the last day of the Cumaribo conference, I met again with the P’s separately so that we could use their language. Most of them are not bilingual. We gathered in a open wall palm roof structure. There were two blue plastic chairs. The rest of the seating was a few benches and standing room. 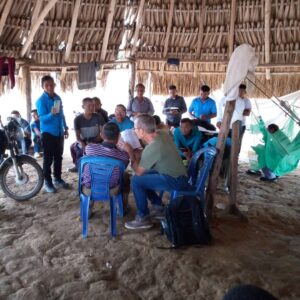 As I entered the hut, I (being the guest of honor) was offered one of the chairs. Rudy was also offered the other chair. Just behind us Manuelito entered. As I was about to sit down on my chair, Rudy seeing Manuelito entering said, “Here grandfather, take this chair.” It was a moment that stood out to me. Manuelito is likely about 70 years old, yet he endured the long trip from Marieta all the way into Colombia just to be there and observe whatever the Lord was doing through the conference. I was touched by Rudy’s respect and selflessness in honoring Manuelito and then the Lord spoke to me. I had no agenda for that gathering but in that moment it came to me.
Some 15 years ago Manuelito suffered an inner ear injury, or maybe it was an infection. He explained it to me the day previous that he went through a time where puss or fluid came even out of his nose. Since then, he lost most of his hearing and suffers from a constant loud howling noise inside his head like tinnitus. The noise is so severe that he can’t hear. He can faintly hear you if you yell into his ear. It dawned on me in that moment that poor Manuelito just quietly attended all the meetings without being able to hear what was being said. Even still he seemed content and glad to just be able to observe. But in that moment the idea that came to me was, “why not make this meeting for Manuelito and cater to him?!!” 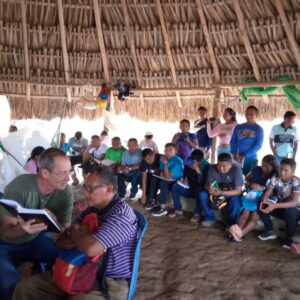 I took my chair and placed it in the center of the hut and I told Manuelito to come place his chair sideways right in front of mine. The Lord lead me to make the entire meeting for him, both to honor him as elder but also to treat him with much more than just an observing experience. I leaned forward close to his ear and said, “father, what would you like to talk about today? or what would you like to hear or study?“
He said, “Long ago when you came to my village you talked about the promised One of God, how God sent Him and that person is Jesus Christ. You taught how He took away the sin of the world and I have been holding on to that word ever since. But if there is more to it, I would like to hear. I would like to hear something especially as I may soon leave this world, something that I can hold on to in that moment“. My own heart filled with joy at his desire as the Lord brought to my mind the other half of the gospel. It is wonderful that we are justified, but having been justified, MUCH MORE we shall be saved by His LIFE! It is wonderfully amazing that “He made Him who knew no sin to be sin for us” but in spectacular addition to that foundational fact is the purpose “that we might become the righteousness of God IN HIM” (2 Cor 5:21).
It was a pleasure to be able to flip open my P Bible and turn to 2 Corinthians 5. In those verses I explained the truths of justification to Manuelito reenforcing that which he had just referred to but then at the end of the passage came “that we might become the righteousness of God” and that being “in Him“, I was able to expound then on who we are “in Christ“. It’s one thing to be forgiven, but it’s another thing to be transformed into a whole new creation. I then turned to Romans 6:3-11. I ended up spending about an hour and a half speaking to Manuelito there in the hut. I knew the others could hear so they took notes and listened to the conversation. Manuelito listened intently. There’s was no lack of intelligence or spiritual life in him, just the lack of being able to physically hear. As we came towards the end of the passage Manuelito’s eyes began to well up with tears and he said, “I’d like to pray“. He then led the group in a powerful prayer of thanks to God. I could not hold back my own tears as I could hear his deep gratification both in his words and in the passion and intonation of his spirit that poured out from him. He thanked God for this gift of sight and for the words given to him that day from the pages of the Bible in his own language. It reminded me of what Simeon must have felt like when he took the baby Jesus in his arms and thanked God saying, “Lord, now You are letting Your servant depart in peace… For my eyes have seen Your salvation“. I had the sense that Manuelito, now contemplating who he is in Christ, was thanking God in the same way as did Simeon, as though that additional step you had been longing to take before you depart from this world was now being taken and the gratification one feels by doing so. I had the sense that his heart was moved to a place of confidence and even boldness to enter the presence of God, as expressed in Hebrews this way, “that by two immutable things, in which it is impossible for God to lie, we might have strong consolation, who have fled for refuge to lay hold of the hope set before us. This hope we have as an anchor of the soul, both sure and steadfast, and which enters the Presence behind the veil.“
Among many special moments, that one for me was probably the highlight of my trip to Colombia. How precious are the hearts of the contrite and the broken. How pleased God is to use the base and despised things of this world to bring to nothing the things the world so highly esteems. I think of the lofty elite of the world and how they likely pay no mind to ‘a deaf old indian’. I think even of myself who am so honored among the P’s and given the nicest chair, and yet Manuelito was honored that day and in the age which is to come will reign as a king and priest both judging and restoring the world with the glory of God by the very essence of who he is “in Christ“.
t.
“But many who are first will be last, and the last first.”
Matthew 19:30