It was special to see many P’s just last week while in Colombia, one of which was Jesús Mayadón. I’m not sure how long it had been since I’d seen him. Probably 20 years. During all the years we lived in Venezuela, Jesús lived just down river from us in a village called Santa Fe. He was a leader in his village and one of the most influential evangelists I think I’ve ever witnessed among many P’s, an eloquent speaker with a powerful spirit of conviction and confidence. He has gone out on several missionary trips to various parts of the P nation and the Lord has used him to bring thousands of P’s to Himself. While I was there in Colombia Jesús wanted me to pass on a video message to Fred Findley who (among other founding P missionaries) was the most prominent in establishing Christianity among the P’s before Robin and I arrived on the scene. Jesús was from that generation and said in his video message that Fred had sent him out to be a missionary as a young man, (which would have been in the 70’s). 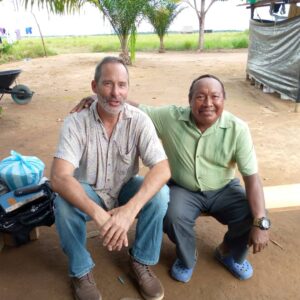 It was fun for me to hear this bit of history as I took the video and it was meaningful for me to be able to send it on to Fred who told me later that the videos brought tears to his eyes. Jesús now at the age of 64 was reporting to Fred his continued faith in Christ all these years. Here is a photo of Jesús sitting next to me taken on June 6.

Three days ago I got a message from E who reported that after Jesús got back to Santa Fe, he lost the use of his legs. The next day he was found face down on the ground, dead. E could not hold back the tears as he relayed this to me. This is a big loss to the P church and a big loss for Jesús’ family and for his village of 240 people among whom Jesús was a pastor and leader.

Please pray for the P church, for the family and the nation as a whole. A death like this of a major evangelist will be seen among the unbelievers as a victory for the powers of shamanism and witchcraft. They will likely say that the God whom the believers profess is less powerful and therefore Jesús was punished by them and defeated. Some of the believers, pastors and teachers may be tempted to fear for their own lives. May God, the one true God, speak peace, truth and life into the hearts of each soul by His living Word.

Thank you Father for the life of Jesús, your faithful servant of all these years. Thank you for blessing me by being able to see him this last time. Multiply your word in the lives of all the P’s and make your gospel flourish all the more.