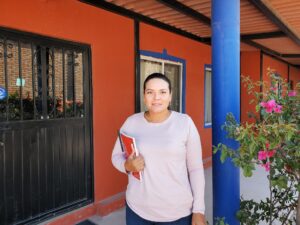 Every year when we come here to Mexico to work on P translation and now this year on radio broadcast teaching for the Ps, the Lord seems to always connect us with new people and things that you would not have forethought. Attached is a photo of Dalia. She’s a tennis and Pickle Ball coach/instructor here. I met her a few years ago through tennis. We were recently invited to a birthday party of some other folks (Malu and Scott… also a new relationship which the Lord has given us) and Dalia was there. Everyone was speaking English and I saw Dalia there alone, trying to soak it in. She’s trying to learn English because much of her clientele is American/Canadian.

In that moment, it dawned on me that there was an English course starting this week. At the CEC Bible School where I teach, there are other missionaries (Ken and Ruth) who operate an intensive English course for two months to Mexican believers who are working with English speaking missions. It’s a specific English course which is meant for Mexicans who are going into ministry with English speakers. But as I looked across the patio and saw Dalia sitting there alone, something just welled up in me with this thought, “why not see if she wants to go to the English course”. So, I put a chair next to Dalia and began visiting. I asked her if she would want to go. She said “yes! I really would”.

I then informed her that the course is specifically designed for believers and it takes place at the Bible school. She said that was okay. I actually ended up talking about the Lord with her for over an hour regarding Christ and the resurrection. Her father had been studying to become a priest, but passed away 5 years ago (I think from cancer). It was a very heart felt discussion about the resurrection and the new body which God will raise up. She said, “that’s why my mother doesn’t want to be cremated. Mi mamá says, well how will God raise up a body from all those ashes”. We talked about how nothing in this entire world is lost to God. All things consist in Him. I said, “even science teaches us that this is a closed energy system. There is no new energy that comes into it or leaves. God knows where everything is and is able to raise up new bodies from the ashes or remains of every body no matter if it’s been burned, lost at sea, eaten by animals etc.” She said, “of course… if He made all of this out of nothing, then why couldn’t He do that?”

I spoke to Ken and Ruth about Dalia and they decided that even though they weren’t sure where Dalia was spiritually, that she would be welcome to come to the course as she may just come to know the Lord during the course if she doesn’t already. They reduced the fee for her since she wouldn’t be staying at the school, so Dalia is enrolled! This morning, I introduced her to Ken and Ruth and to the class. She is there as we speak. 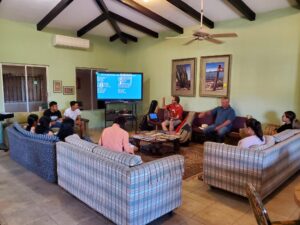 As you think of her, ask the Lord Jesus to reveal Himself to her. I sense this whole thing came about by Him. You can see attached photos which I took this morning. There’s Dalia in the worship session which they sing in both Spanish and English each morning.