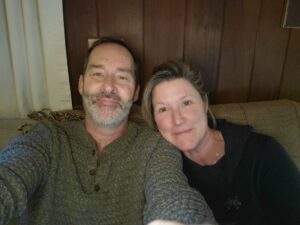 We arrived at Rick’s to set up a new computer to be used at the recording studio. The new computer was defective so we had to return it and order a new one. This has delayed our trip by about 5 days. While we were waiting for the new computer to arrive, the Lord led us to go spend some time with my cousin on the north coast. She just had surgery for breast cancer and they are also going through some other difficulties, so we felt it would be good to see them. We have been trusting the Lord to be a loving presence and listening ears. We are asking for prayer for Scott to come to know the Lord Jesus. He was raised under a strict Catholic mother who denounced God on her death bed and his father later in life became an atheist, at which time he had a long talk with him explaining why ‘there is no God’. This had a huge effect on Scott who at that same time then decided to denounce God. But we see glimmers of light and faith in Scott. We see he is drawn to the things of God in essence. We are praying the Father drag him to Jesus in Spirit and Truth. What a difference in his life that would make.

Two days ago, Scott set I up with an appointment at his massage therapist in Fort Bragg. The best I’ve ever experienced. Richard, the therapist, really took an interest in our work and so he asked me to give a 1 hour lecture at his home school community. So yesterday, Robin and I took in our Power Point presentation and shared our work with these kids. It was a fun educational and interactive presentation. The kids were fascinated and we trust God has planted some seeds in their hearts as to who we are as human beings and what matters most in life.

The new computer has arrived to Rick’s. We will head back to San Jose today. We hope to get it completely configured and transfer all my essential programs onto it. So thankful to have Rick’s expertise and serving heart! We may be able to visit another church in Pleasanton on the weekend but are uncertain if time will permit. While at Rick’s as he works on my computer, I plan to help him by building storage shelves in his garage. On Monday, we also have an appointment at the tire shop to take off the snow tires and put on some All-Season tires. We hope to be on the road again by Tuesday. We also plan to stop in Cottonwood, AZ to visit and thank SOM and hope to be rolling into Mexico on the 13th or 14th depending on if we spend a night in Tucson or not. We will need to fill up on groceries in AZ before crossing the border.

Thank you so much for your prayers, especially for Scott. May he see the LIGHT of the world which his heart has always longed for.