Over the past several weeks, I have given priority to rehabilitating my health. I continue with the biking, stretching and swimming, limiting the tennis. While at the gym, the Lord connected me to Sacha, who is a very dedicated, talented and knowledgeable therapist. She has been working with me each day, educating me about muscles and exercises I never knew existed. I’m encouraged to continue on her program as I continue to be headache free. It is so nice. Thank you for your continued prayers.

As in all things, the Lord has more than one purpose in the things He leads us in. During my many sessions with Sacha, topics would come up in which I would engage as I would sense the Spirit giving me thoughts to share. Topics about life, character, inner battles, relationships, emotions, etc. She has been through some difficult things in her young life. I was also especially pleased to meet her boy friend Alec during the sessions. I felt an extremely genuine connection with him. What a wonderful, pleasant young man. They are about to leave San Carlos, as Alec has to continue his nursing program in the US. I felt led to invite them out for lunch. We went to Jax Sacks at 1pm and had a wonderful two hour visit. As we visited, I asked Alec what he meant by “spirituality” (he had mentioned that spirituality was part of his life) which led into some interesting topics on God. At the end of about a 2 hour visit, they asked what I was going to do the rest of the day. I said I would be going to my office. They said “what do you do there?” and I mentioned I had a radio program. Their interest perked when, as they continued to inquire, I told them about the P’s. They were actually dumbfounded, really. I asked them if they would like to go see the studio and they totally wanted to. So, I brought them here and we sat on the floor till dark (7pm) as I shared our journey, showed photos of our life in the jungle, played and translated one of the radio programs, etc.

Alec has spent about a year in a church in his past. He was full of spiritual questions about God, the P’s, Jesus. They both just seemed to drink in what they were hearing as in their own words, they said it seemed like the authentic form of belief in Christ. As the time lingered, I realized Robin would be now wondering of my whereabouts (we moved temporarily to a new location here which takes about an extra 40 minutes on the bicycle to get there and now it was dark). One thing led to another and the next thing we knew, Alec and Sacha were coming to dinner at our house (well, not “our house” but Jerry’s house. The same Jerry who also has the purple house from last year. He and Leigh opened their guest suite to us since we were in need of a place to stay). The funny thing is that whenever the Lord seems to be doing things here, Jerry seems to be not far away. Alec and Sacha got on their motorcycle and I on my bicycle. As I was leading the way along the dark street, who shows up but Jerry in his car to pitch in. 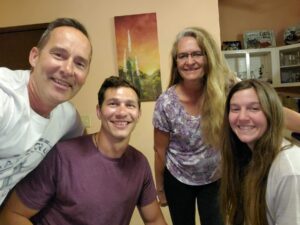 To shorten this part of the email, Alec and Sacha stayed till 11pm and we continued the conversation about God, life, truth, and our different adventures and histories. I wanted to share this with you since I know beyond a shadow of a doubt that this is another one of those God events that you just don’t plan or foresee. Please see Alec and Sacha’s photo above after dinner at ‘our’ house. One of Alec’s questions to me what “why would I have to believe that Jesus died for my sins?” They both admire Jesus, but don’t seem to realize who He is. After quoting several of Jesus’ statements, I said to Alec, “it really all depends on what you do with Jesus”. If you would pray for them, I sense that the Lord has a wonderful journey ahead for them and that the Father is drawing them to Jesus. Maybe even missions as they were so impacted by our story. But it might be kind of nice if, along the way, they were born again. (lol) 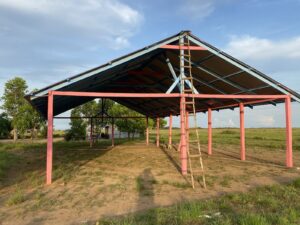 On to the other photo and the other prayer request. Russell texted me this photo a few days ago. It is a large roof structure which will be used for an annual gathering of tribal pastors from all over Colombia and Venezuela. Many of them will be P’s. Russell invited me to attend. The conference is in June. The location is near the border of Venezuela, but not too close. He said it is a secure location protected by a military base of which the commanders there are his friends. So, this is kind of a very nice opportunity for me as the P’s would love to come to see me in person and it could be a great spiritual event for us all. I am seriously considering going and so would ask for your prayers for the Lord’s leading.

I have more news on the studio and the radio programs which are coming along nicely. I hope to send a short video soon on those topics in the days ahead.

“No one can come to Me unless the Father who sent Me draws him; and I will raise him up at the last day.  It is written in the prophets, ‘And they shall all be taught by God.’ Therefore everyone who has heard and learned from the Father comes to Me.”
John 6:44-45